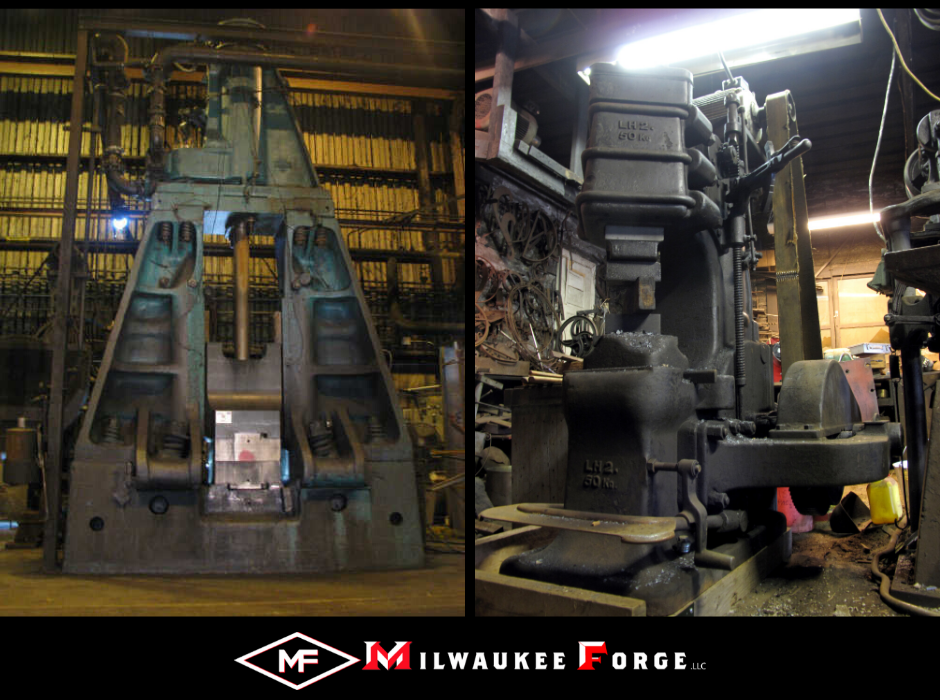 The Double Acting Steam or Air Power Drop Hammer is the most powerful machine in general use today for the production of commercial impression die forgings by impact pressure. Shortly after the First Industrial Revolution (about 1760) the steam hammer was developed. Then, in 1838, James Nasmyth of Scotland developed the hammer referred to as a double acting hammer in which steam or air pressure is applied to both lift the ram and also to drive it down with greater velocity than gravity alone. Such hammers can attain ram speeds up to 350 inches per second, although for stress and pressure design analysis a ram speed of 200 inches per second is used.

The basic construction of the hammer consists of a heavy anvil base, part of which is usually below round, which supports two frame members (columns) that accurately guide the vertically powered ram. The columns also support the cylinder in which the piston and piston rod is driven to operate and power the ram. The lower surface of the ram carries the upper die which contains the top half of the cavity, or impression, that shapes the forging. The lower die, which contains the remainder of the impression, is firmly wedged in place in the anvil by a driven key, as is the top die on the ram.

Hammers are energy limited only, and the largest of these machines can produce energy levels which can exceed 500,000 foot pounds, or 6 million inch pounds per blow. This requires that the dies used for hammer forging must be capable of absorbing the entire force and energy of the blow without plastic deformation. Hammer forging dies must, therefore, be designed with sufficient face areas and strength to meet this requirement. All hammers are rated by the weight of the ram. Generally, a ratio of ram weight to anvil weight will find the anvil, or base, weighing twenty (20) times the weight of the ram.

Hammer operators have the ability to control the striking force of the machine in the way they operate the treadle of the hammer. This control, and their level of experience, allows them to make effective use of multiple impression dies to preform a billet to a shape that will best fill the finish impression and maintain proper grain flow.

The Programmable Air Hammer has a number of new features which allow the operator to preset the number of hammer blows and also the force of each blow. The operating time is very fast and running clearances are reduced because of a new ram guiding technique. Most forging configurations can be made with closer match and closure tolerance. The hammer can cycle at a rate of 80 to 120 strokes per minute.

The Board Drop Hammer

The board drop hammer has maple boards which are firmly attached to the ram and are used to raise the ram to preset heights by means of revolving rolls pressed against the boards. When the ram reaches the preset height, the pressure of the rolls is released and the ram will either drop by gravity or the operator will release the trip which causes a set of clamps to grip the boards, thus, holding the ram at the top position. Since there is no downward force applied to the ram, the force of the hammer is limited to the falling weight of the ram and the stroke through which it travels. Standard sizes range from 1000 to 5000 pounds, in increments of 500 pounds. Board hammers are now seldom used but are still viable in high elevations where compressed air and/or steam is very expensive to produce.

The Air Lift Gravity Drop Hammer was developed during the early 1800’s. It is similar to the board hammer in that the forging force is derived from the weight of the falling ram assembly. It differs in that the ram is raised by air pressure. A major improvement in maintaining alignment of the ram (top) die with the anvil (bottom) die was achieved with this design in that the piston and rod could be maintained in the same relative position to the ram. This allowed the guiding surfaces to be fit more closely to the ram itself, and improve dimensional variation.

Counterblow Hammers are not widely used in the U.S. but are used extensively in Europe. The basic principle of counterblow hammer design is to drive the upper ram downward using steam or air, while at the same time the lower ram is accelerated upward by a steel band (which ties the top ram to the bottom), or by a hydraulic coupling system (for larger hammers.) The lower ram is approximately ten percent (10%) heavier than the upper ram which, therefore, pulls the upper ram back to its starting position upon completion of the blow. The largest counterblow hammer is rated at 900,000 foot pounds of energy. Although speeds and cycles are about the same as for double acting hammers, counterblows generally have lower productivity because of the inability to perform operations in multiple impression dies, as well as difficulty in locating the forging in the hammer. Tolerances may also have a broader span since with two rams in motion; the guiding clearances are twice as much as in an anvil type power hammer. Handling, loading, and unloading are also somewhat easier in anvil type hammers, leading to higher output.

Forged vs. Cast – What’s the Difference?